Rebeca has danced from the age of four and was an integral part of the foundation of Scoil Rince De Danaan since its inception. Through vast international experience as a performer, competitor, assistant teacher and certified teacher, Rebeca combines her delights of Irish dancing and working with children with her strong skill in teaching methodology, choreography and biomechanics to bring a healthy learning environment for students at De Danaan. She is a former Western Canadian Champion and was a regular medalist at the North American championships, the All Ireland Championships and the World Championships. Highlights of her performance successes include dancing with Cherish the Ladies, Natalie McMaster, Eileen Ivers, Beoga and at the 2010 Winter Olympics Medal Ceremony. As the owner, artistic director and head teacher for the De Danaan School of Irish Dance, Rebeca takes pride in sharing her passion and love of Irish Dance with her students. Nora danced with the Violet Moore School of Irish Dance in Vancouver since age 7 and she competed at the World level for 10 years with the Moore School and The Maguire-O’Shea Academy in London, England.  With a strong creative, competitive and adventurous spirit, Nora has developed and maintained a strong passion for Irish dance and music during her entire life. She has danced, performed and/or competed with Darren Maguire, Jean Butler, Colin Dunne and countless other Riverdance and Lord of the Dance cast members. Her last World Championship competition was in 1993 when she placed in the top 30 in solo and 5th in her team ceili competition.  Her last North American Championships was in San Francisco in 2000 where she placed in the top 10 in two dances and 18th overall.  She won numerous championships in the United States, Canada, the United Kingdom and in Ireland and she thoroughly enjoyed performing locally and internationally during the 22 years of her dance career.  She greatly cherishes all the life-long Irish dance friendships she still has today! Nora’s love for Irish dance took her to the next level in 1994 – teaching students to reach their personal, competitive, performance and recreational goals!  She received her TCRG in 2002 (registered teacher with the Irish Dance Commission in Ireland www.clrg.ie ).  She finds teaching to be a constant dynamic challenge integrated with fun and amazing exercise!  She thoroughly loves being an integral part of the dance journey of training 4 to 7 year old beginners to become the best they can be as they step onto any stage to perform as well as compete at the Western Canadian, North American and World Championship stages!  Nora also now enjoys training and mentoring some of her experienced senior students to become instructors, Eire Born team captains and TCRG’s. She still enjoys actively dancing with all her students today. Nora lives in beautiful Deep Cove with her husband, Marcel and two daughters, Leila and Malia.

After dancing from the age of 6, Leslie founded Scoil Rince De Danaan in 2000. She taught her own classes all throughout Vancouver’s Lower Mainland and workshops throughout North America. Her students have placed competitively amongst the top in the world and gone on to dance professionally in shows such as Riverdance, Rhythm of the Dance and Heartbeat of Home. 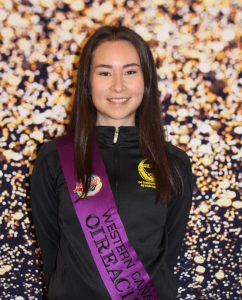 Nicole has been dancing with DeDanaan since the age of 7. Since then, her passion, hard work, and dedication has led her to being a three-time World Championships qualifier and competing at the National Championships numerous times. With experience as both a performer and a competitor, Nicole is able to bring aspects of both areas of Irish dance and mentor students with various goals. Nicole enjoys teaching and is looking forward to taking her T.C.R.G. exam. Outside of her dance career, Nicole is currently completing her last academic year in the Faculty of Health Sciences at Simon Fraser University.

After taking ballet classes for several years as a child, Melanie discovered Irish Dance at the age of 9 when she was introduced to Riverdance. She began her competitive career with the Stewart School of Irish Dance in 1998, and joined Scoil Rince De Danaan in 2008. For many years, Melanie enjoyed competitive success within the Western Canadian region, placing as high as 4th at the Western Canadian Championships. She gained experience travelling and competing abroad at international competitions including the All Ireland Championships, All Scotland Championships (12th), the Great Britain Championships (24th), and the North American Championships (21st). Melanie also qualified for and competed at the World Championships on four occasions, before retiring from competition in 2011. Melanie has experience as a ceili dancer (she was a member of a Western Canadian winning mixed 8-hand team in 2001) and is currently a member of the Eire Born Irish Dance Company (performance highlights include dancing at the Irish pavilion and medal ceremony during the Vancouver 2010 Olympics, and an appearance in a Campbell’s soup commercial).

After a brief hiatus from dance, during which time she completed a Bachelor of Industrial Design Degree at Emily Carr University, Melanie returned to the studio and has completed the 12 grade exams required to qualify for the TCRG exam. She is very involved within the De Danaan community, assisting in classes, dancing with Eire Born, and preparing for her TCRG exam. Outside of dance, Melanie is an award-winning product and graphic designer, and enjoys all things creative. Melanie is excited to work with dancers of all levels, and hopes to support students in achieving their goals and learning valuable life skills along the way.

Michel became involved with the Irish Dance community as a bookkeeper in September 2012. She is responsible for billings, class changes, clothing and shoe purchases, etc. She loves to cycle, read, and work with numbers.  She lives with her husband of 44 years in Deep Cove and feels privileged to be associated with De Danaan and its family of committed dancers and their parents.